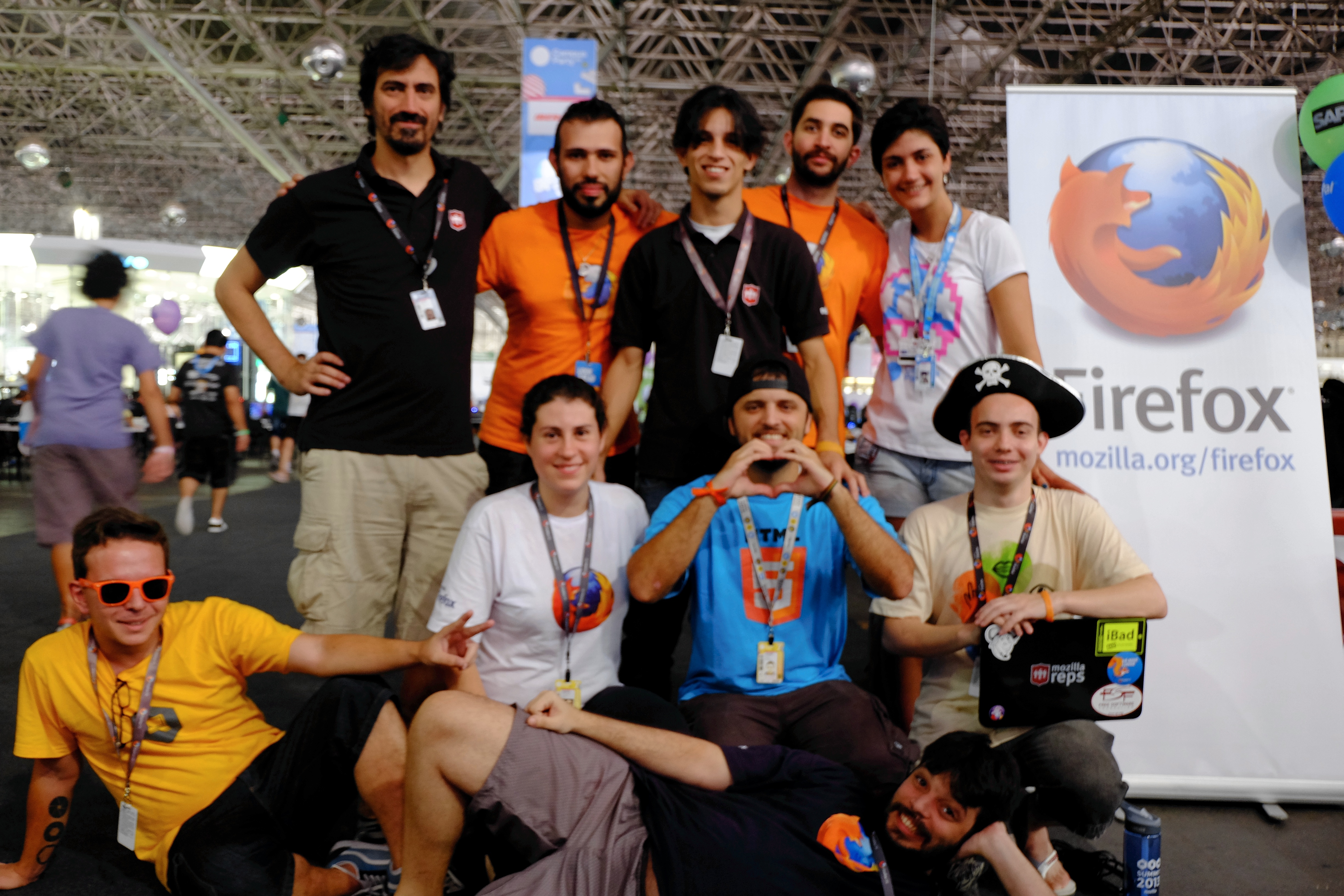 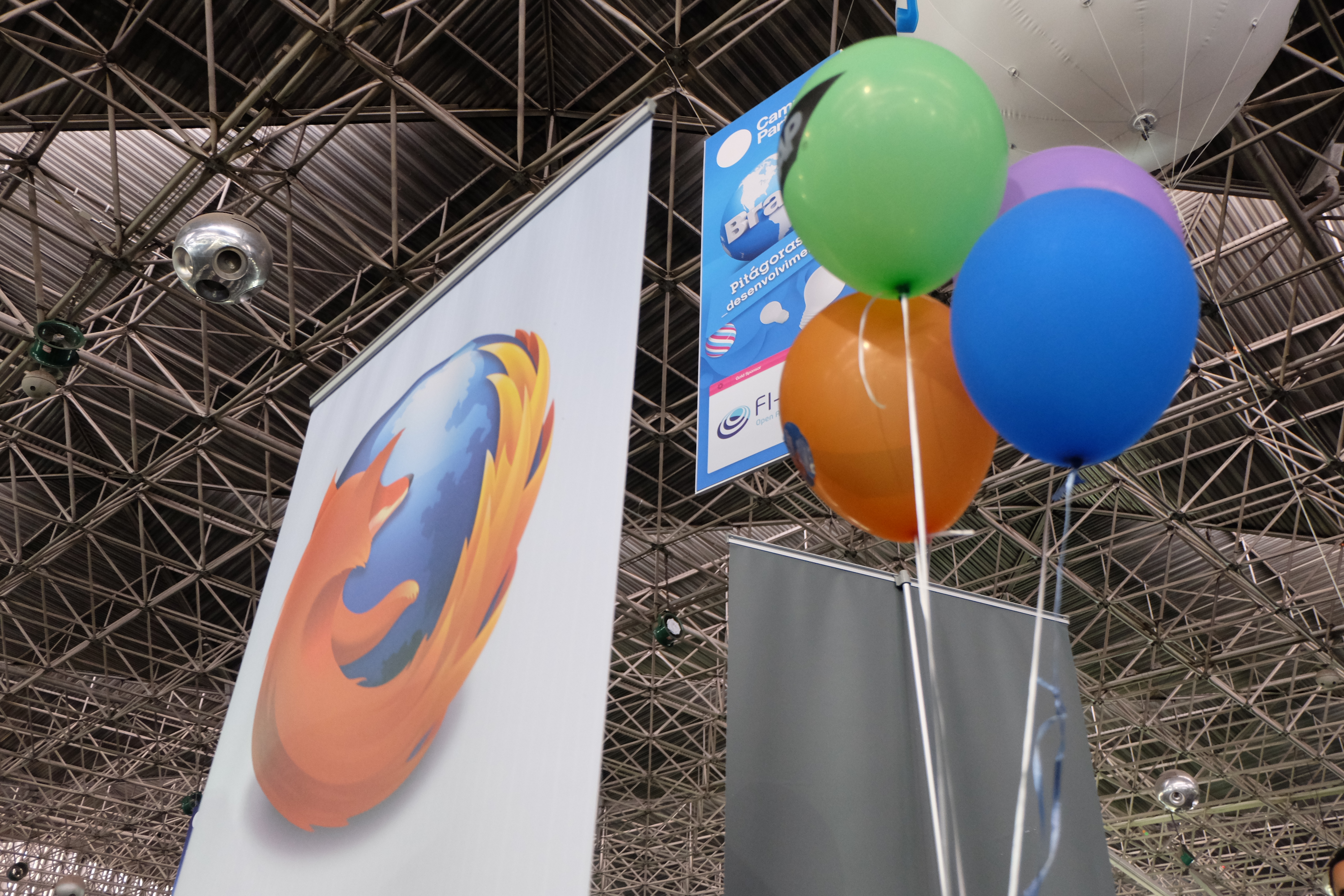 As we learned during the Mozilla Summit 2013 one of the main objectives for Mozilla for the next years is to grow the community from 100 thousand volunteers to one million volunteers. If with a hundred thousand mozillians we can do so much for the world imagine what we could do with One Million Mozillians.

When Adriano Cupello came back from the Engagement Work Week he was bubbling with the idea that our main objective during Campus Party should be recruiting more volunteers to help the One Million Mozillians initiative. Here in Brazil we as a community are not evenly distributed across the country. There are many places where we have no volunteers at all.

Campus Party Brazil is, arguably, the largest tech gathering in the world. It hosts eight thousand campers in a single pavilion with high speed ethernet connection and benches for everyone. There are eight stages with 24/7 talks going on. Its a non-stop venue that for seven days is filled with gamers, bloggers, developers, entrepeneurs and more. It is a great opportunity of spreading the Mozilla mission and get closer to the one million volunteers mark. Our plan was to use our many activities to attract people to our Mozilla table where we could chat face to face with interested parties. 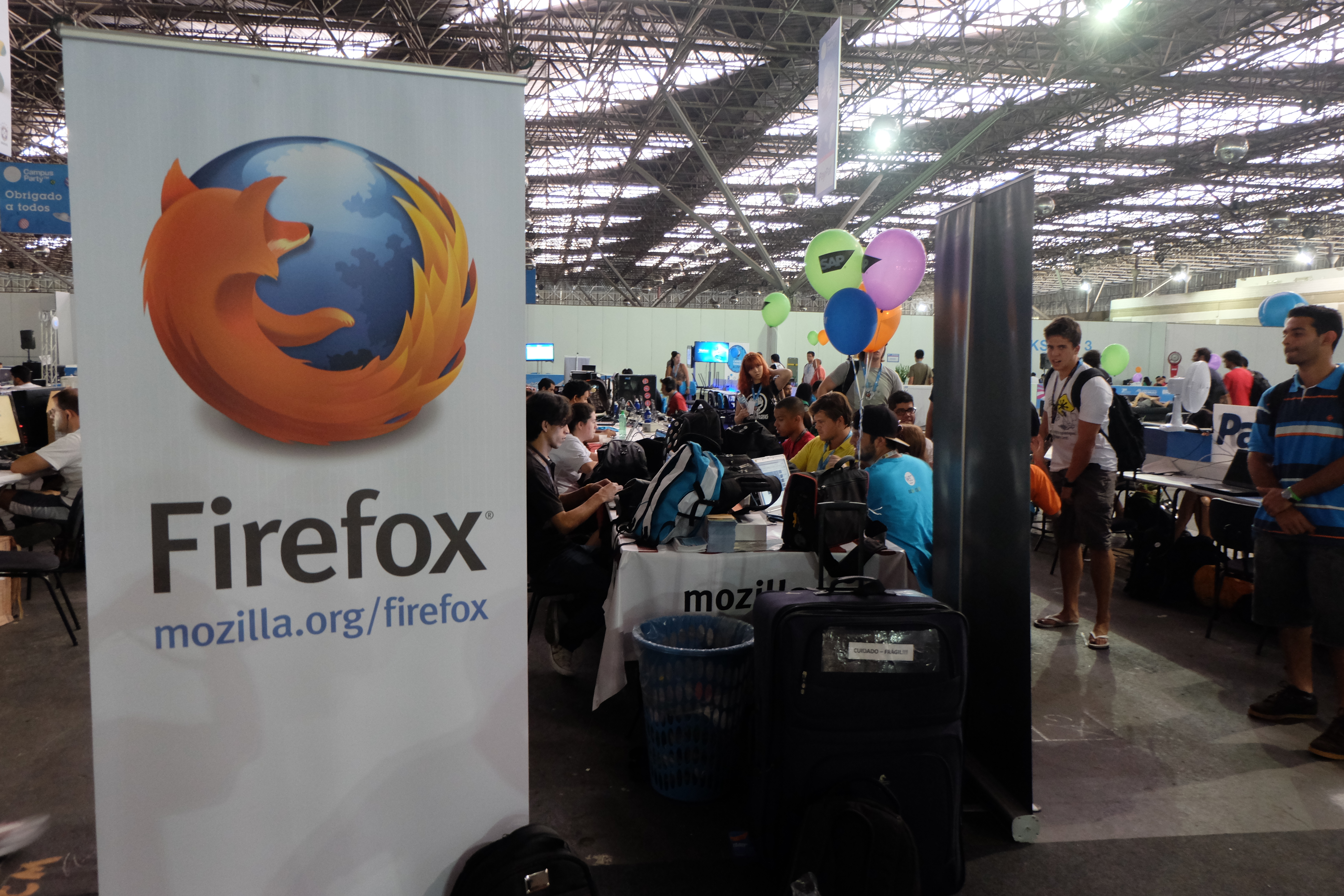 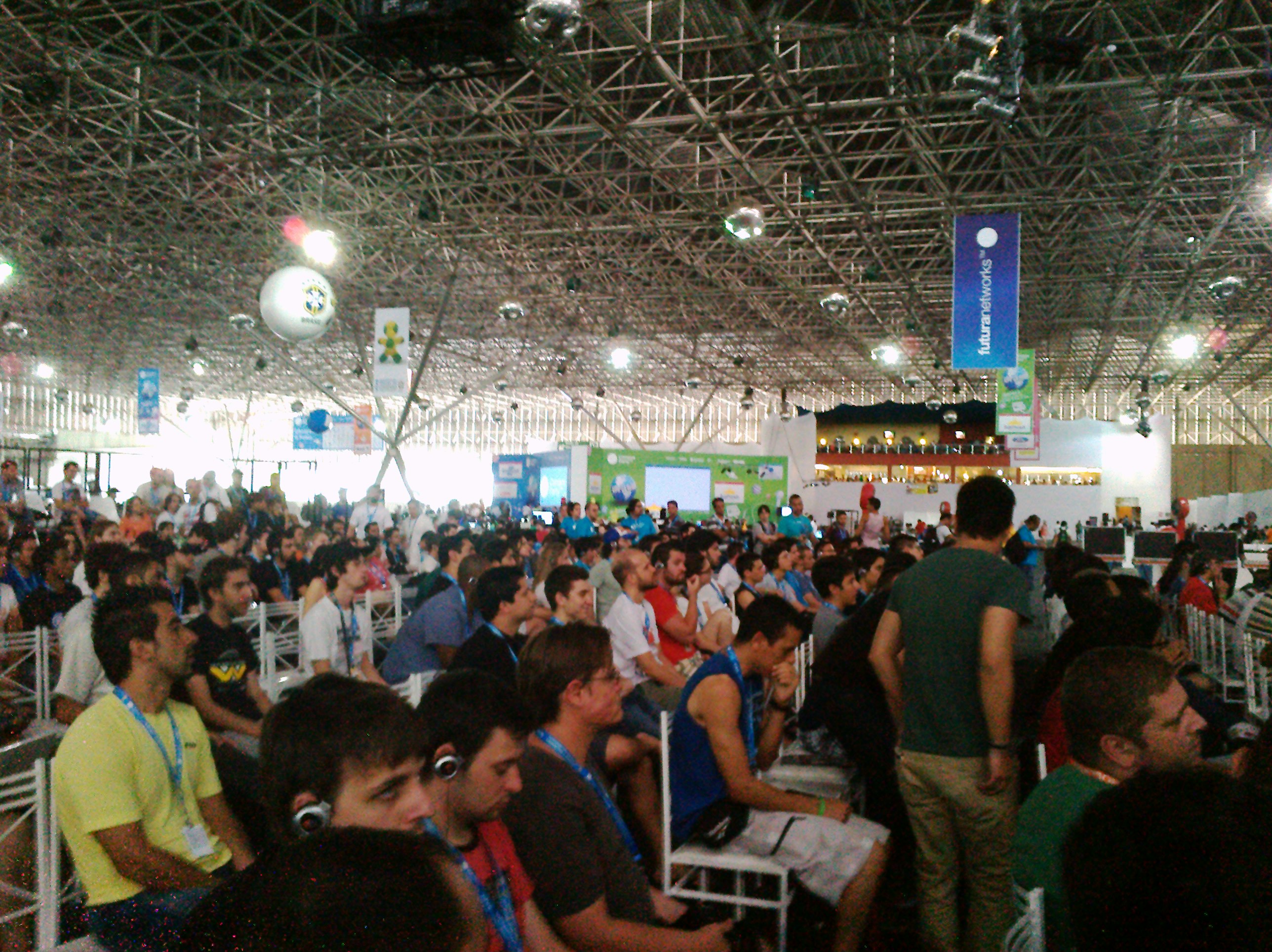 As mentioned above, we had many activities during Campus Party and among them a record number of talks. These talks were our main focus point to acquire new volunteers. 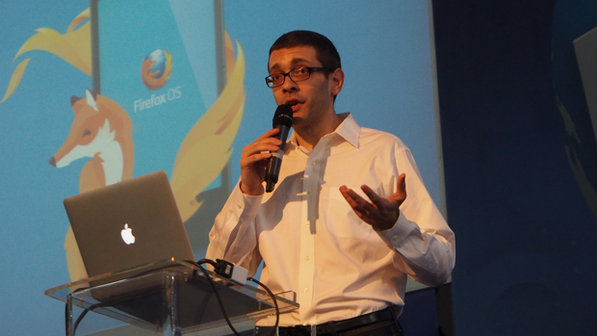 The Keyonte by Andreas Gal told people about the importance of Firefox OS for the mobile world by touching topics such as open standards, privacy, freedom among others. This talk was held at the main stage, a prime place for spreading the Mozilla mission to people how normally would not come to us.

We had two talks about Firefox OS app creation at different times and with different approaches. One of them was a technical talk I gave at the Pitagoras Stage explaining the nuts and bolts of app creation. This talk happened during daytime and was a part of the normal schedule. The other talk was done as a pair (all our community talks were done as a pair) and me and Ricardo Pontes spoke about Firefox OS app creation really late during the community time schedule that happens after the normal schedule which means our talk started at midnight. This talk was planned to be very informal and make a lot of use of commedy. You can’t expect people to pay attention to your talk at midnight if you’re there being serious. Basically we shown them the construction of a full app from beginning to end, the app called Desodosero was a world-bettering revolutionary app that calculated how much deodorant the Campuseros (people camping at the venue) needed to use during the event. Our talk was a success, overcrowded and we answered questions for a while. In summary those two talks were a success.

Mozilla Support (a.k.a. SUMO) has a talk by Maicon Ferreira, Ricardo Pontes and Ralph Daub (even though Ralph was remote). SUMO is a great opportunity for new Mozillians to have a great impact in the community and one of the pillars that hold Mozilla working. The talk was perfect and attracted a lot of people to our table. (our secret plan was working…)

Ricardo Panaggio and Morvana Bonin talked about how to protect ones privacy online and showed tools such as lightbean among others. In a world where NSA and other three/four letter agencies sniff all our online life it is a good practice to learn how to uphold your rights. The session was excellent and served to show to some people that Mozilla is larger than just Firefox. 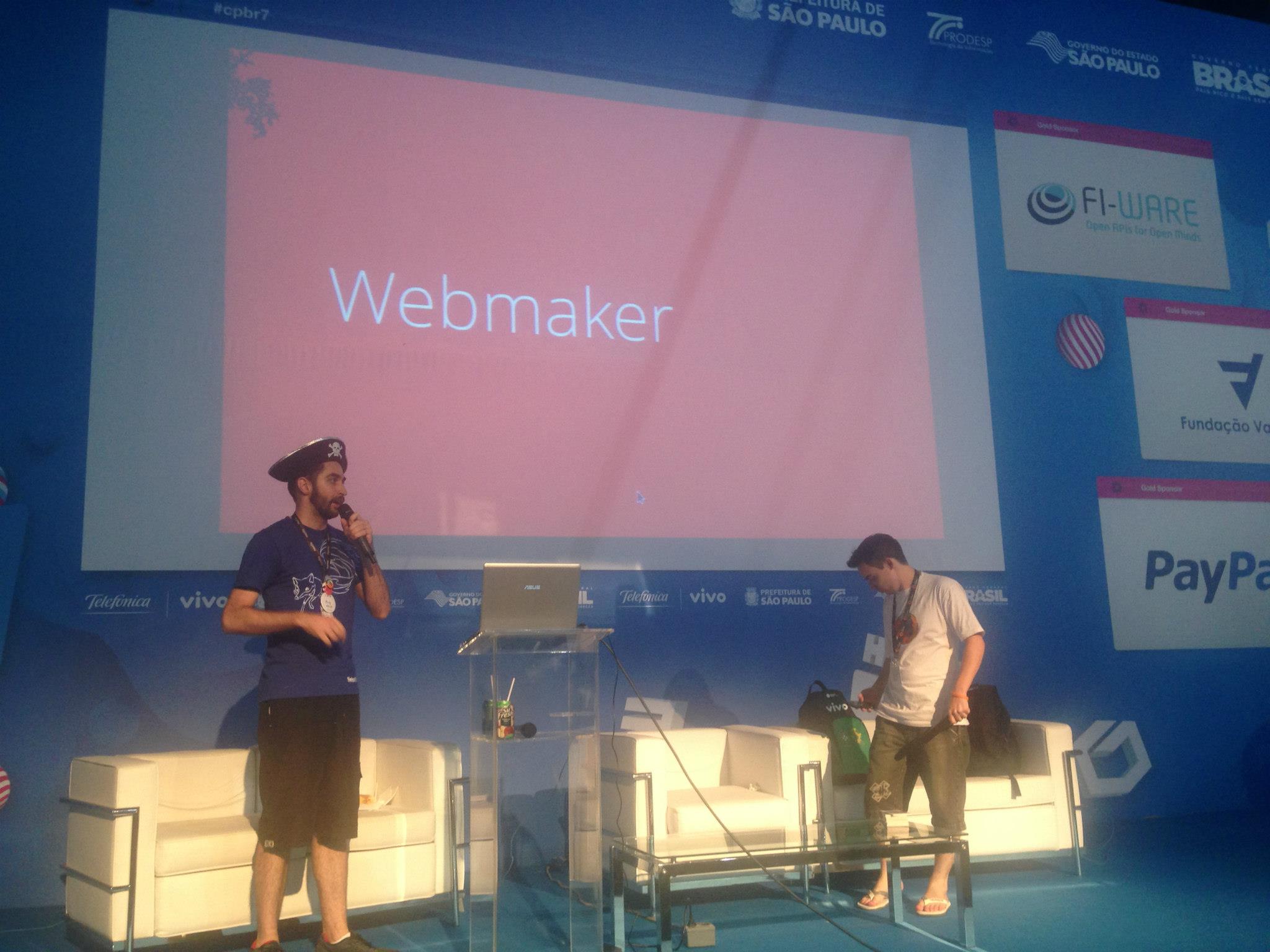 Carlos “Coragem” Valim and Ricardo Panaggio spoke about Webmaker and Appmaker and the importance of learning how to make the web instead of just consuming it. The session spread to topics such as Web Literacy by explaining how important it is that people learn to dominate the new medium. 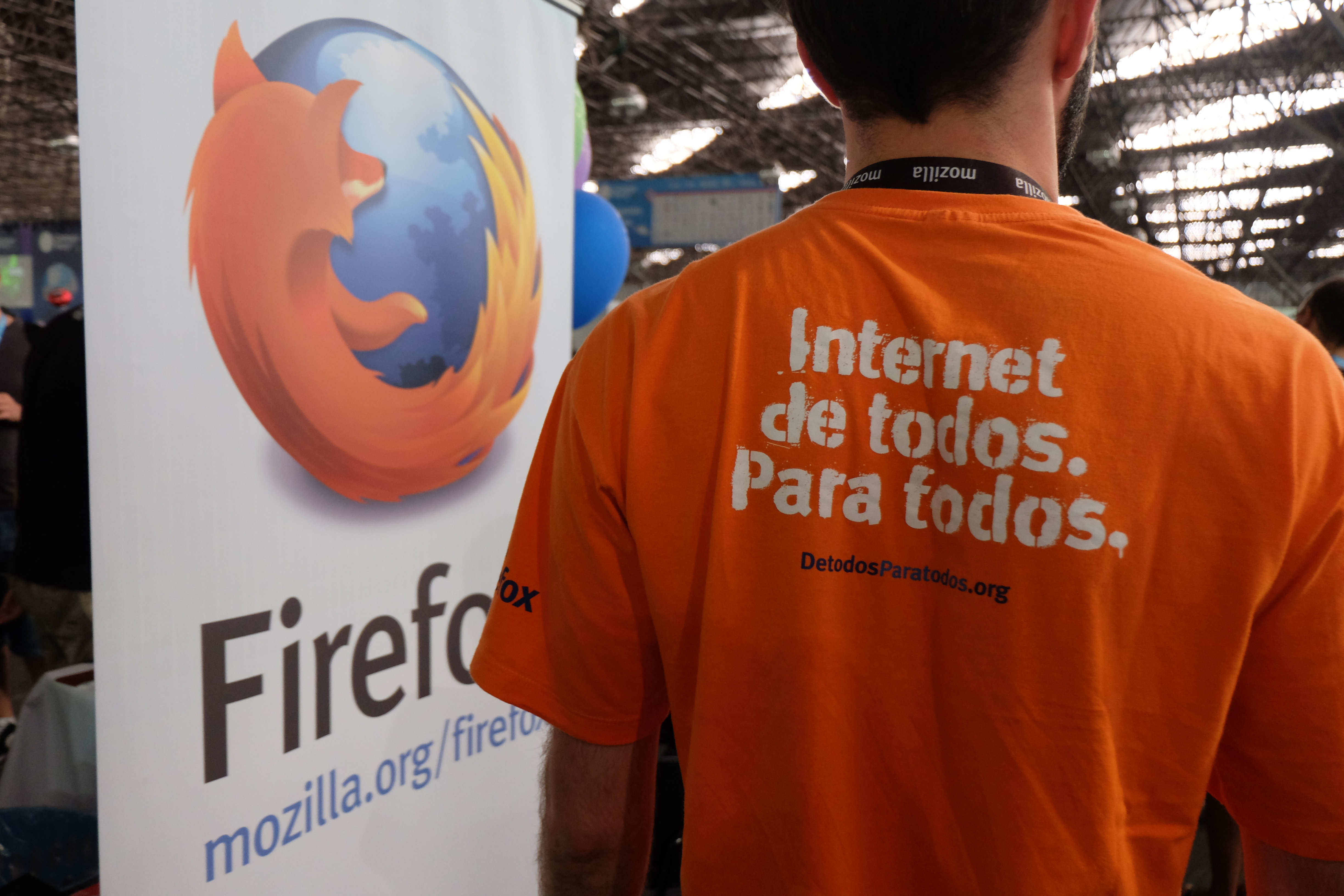 Visit our kitchen, I mean, Community

A good surprise was that all of a sudden there was a free slot on a stage during communities hour (a.k.a. you should be sleeping but are awake because it is impossible to sleep during CP). We agreed as a group that this new session should be a talk to introduce the Brazilian Mozilla Community to people. Our idea was to use some stand-up comedy, and lots of people on stage to explain the audience what mean to be a Mozillian and how fun it is. In my humble, personal and biased opinion this was our best talk and undoubtedly the one that attracted most people to our table. 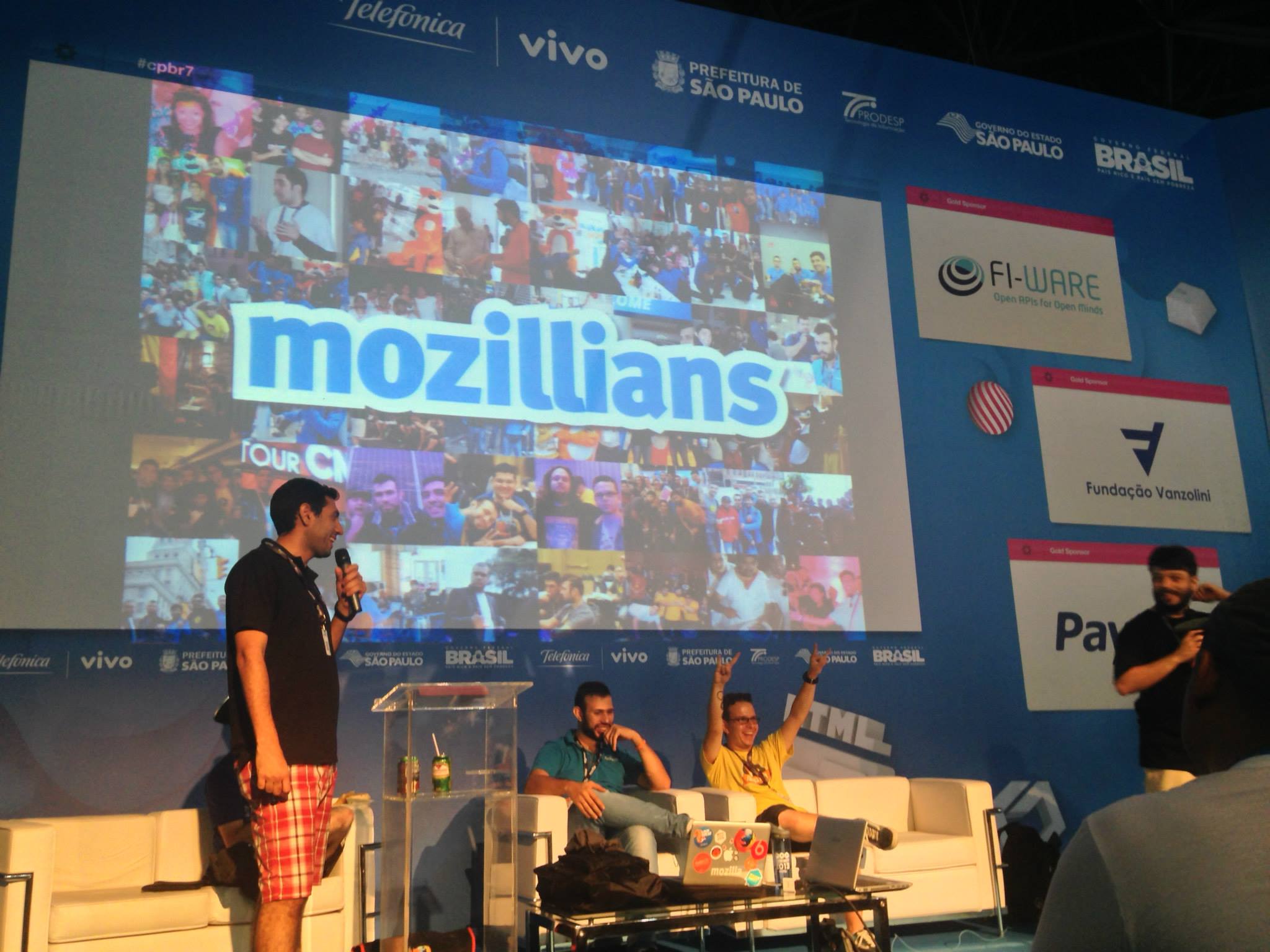 Of the 15 people we took to the event, three were employees of the Mozilla Foundation working on the coolest project of all which is Mozilla Appmaker.

The Appmaker is a system for mobile app creation without the need of previous programming knowledge. It is still at the early days but it is getting more powerful each week. It has the potential to revolutionize the world by democratizing app creation.

Just like Microsoft Access brough the world of databases to the common people, Mozilla Appmaker is looking for a similar effect by bringing app creation to the masses.

Just imagine how many times you or your friends though about an app that could solve some daily problem but didn’t had the knowledge to build it. The idea behind Appmaker is for one day enable anyone to create the apps they need to solve their problems. 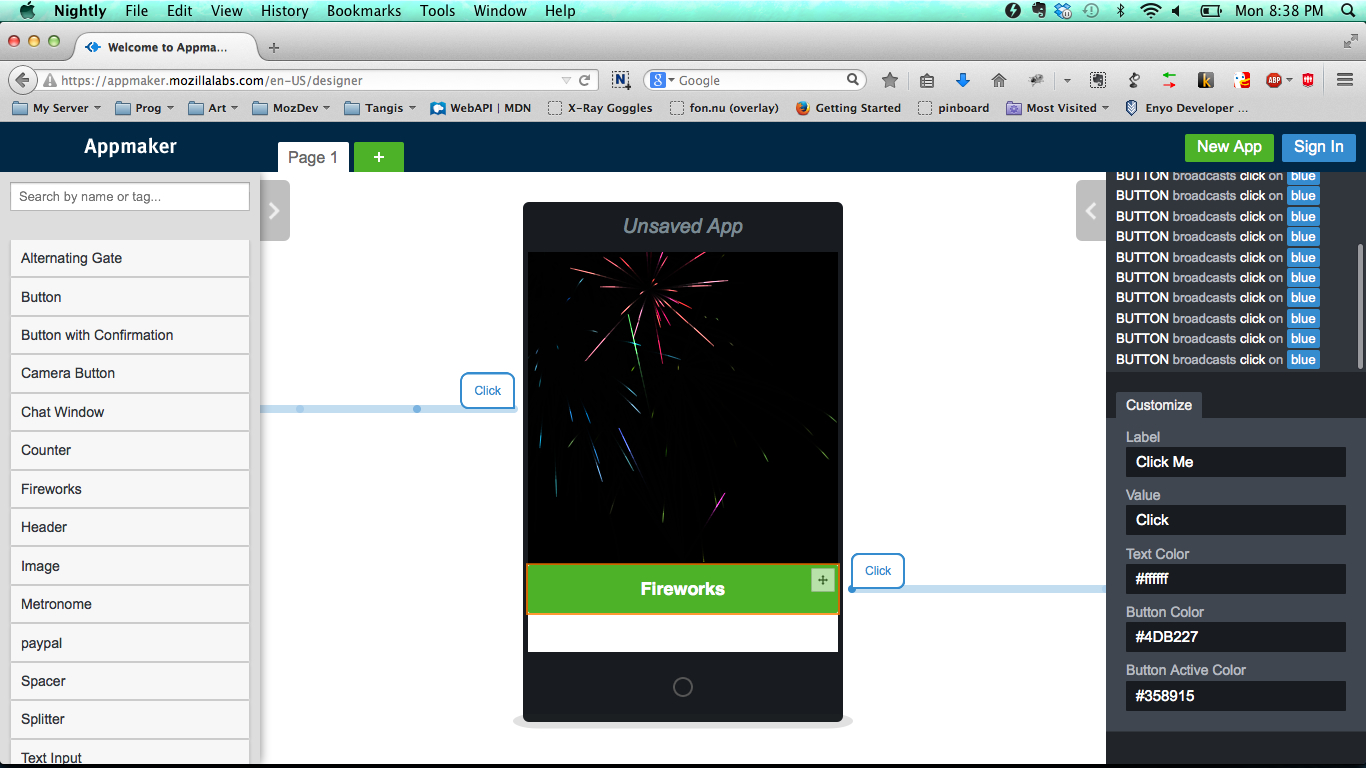 During CP we had a fantastic talk by David Ascher that should be viewed and held a workshop for Appmaker components with Bobby Ritcher. All Appmaker created apps are a colection of components. This workshop had the objective of creating more diversified components thus enabling more types of apps. Our audience was mixed between developers and people with other backgrounds. Developers were shown how to create components and people without programming skills were shown appmaker, everyone was happy! 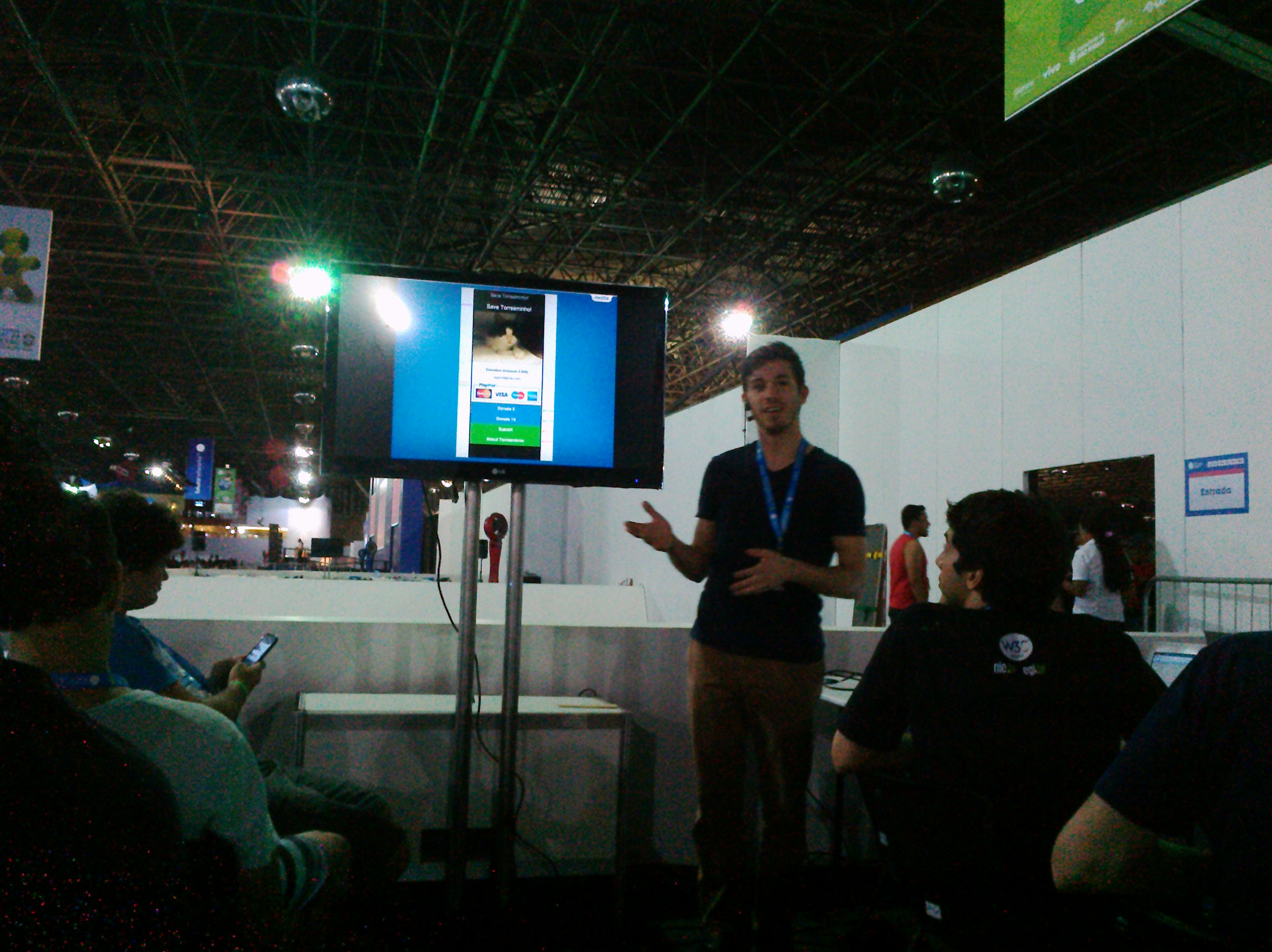 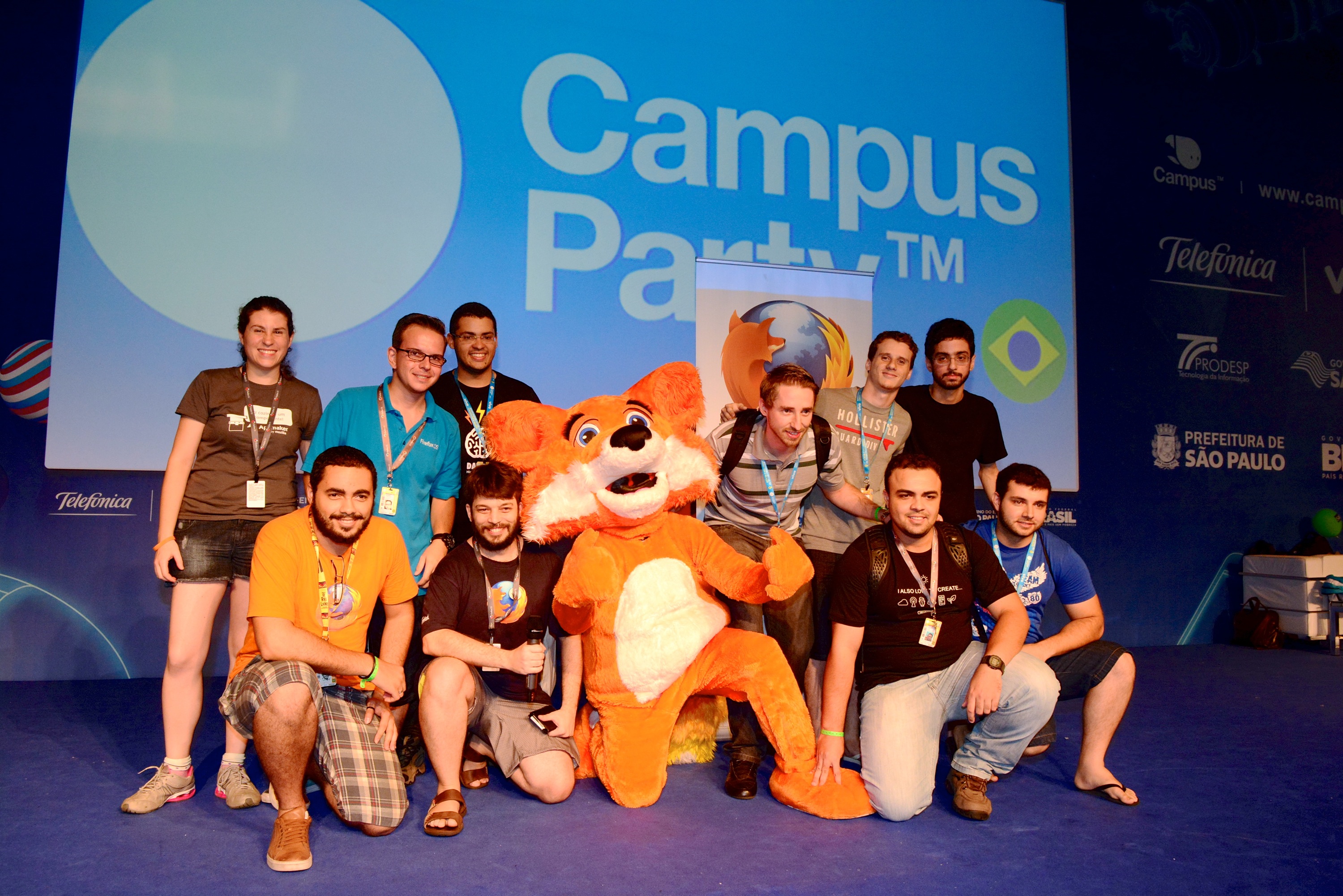 As with our recent events, we had a Firefox OS App Creation Hackathon during CP. Our contestants had six days to create their apps. During this period they were free to come to our table to use our tests devices, get mentoring or just chat.

IMHO the most surprising fact was the record submission of apps. We received 38 apps. In all of last year hackathons, I’ve never seen so many apps at a single competition. The second surprise was the quality of the apps which was fantastic. Some apps were ready for the Firefox Marketplace before the competition ended.

All the apps we received are available at our Mozilla Brasil Github in repositories that start with hackathon-cpbr7-.

Some of our gems were:

This is a Tetris based game with a twist. Not only the circular puzzle idea is fantastic, the implementation is very well done converting normal Tetris play to arcs at drawing time. This app has everything to be a huge success with casual gamers on the Marketplace. 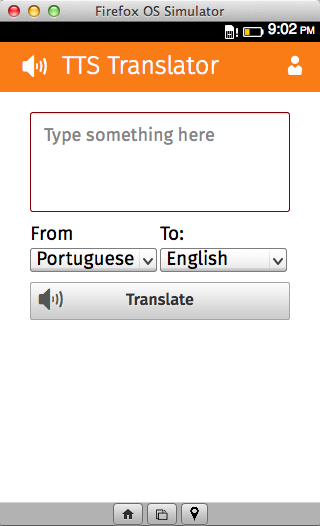 Unfortunately animated gifs don’t have sound so there is no point in saving one for TTS Translator. This app picks a phrase written in one language, translates it to another and speaks it. You can write in English “Where are the toilets?” and hear in plain Portuguese “Aonde fica o banheiro?” (or something similar). Fantastic!!!

This game uses the avatars from your Twitter followers to create a match game. Simple and creative. A very good usage of social network API integration.

We had lots of other cool apps such as Photofilters and Econobreja.

As mentioned above, our main objective was to recruit new volunteers for our community and all our activities served as focus points. At the end of each activity we called people to meet us at our famous Mozilla table.

We had a record recruiting during Campus Party, by the end of the event we had 35 new Mozillians (… and growing) and started a mentorship program to better guide these new volunteers on the secret paths of Mozillians (a.k.a. its on the wiki but where). We’re still processing some emails from people that want to join. Absolute success!!!

We reached our objective of recruiting people from other areas of our huge country. From now onwards, our activities will be much easier and the new members are already helping us and giving new impulse to our endeavours. Two of our new volunteers must be mentioned here, Neto and Qaiq (a.k.a. ousadia e alegria) because since the very beginning of CP they helped us a lot. They were the spirit of our community when wearing the Fox costume and they could dance! We did a flash mob at the main stage during the closing ceremony with the Fox and that famous fox song that attracted all the 8 thousand people. It was said to be the best closing ceremony in seven years of Campus Party. Some people twitted that they installed Firefox after that dance… go team! All our new members should be praised because they all got their hands dirty and helped us a lot during the event. They are all making the web a better place.

Our super engagement and social network team, Adriano Cupello, Luigui Delyer, Lenno Azevedo created actions and events so well and creatively that they should be studied in Marketing schools. From scavenger hunts to installfests. From the Fox costume posing for pics to engaging new Mozillians for help. All the actions were great and essential for recruiting and keeping new members.

There are too many people to say Thank You and if I list them all then this blog post will start looking like the SF monument. Some people went out of their way to help us all and should be listed here, among them, David Ruiz, Marcos Koga, Macarena Garcia, Guillermo Movia (we’ll make him Brazilian soon), Marcia Zikan and José Luis de Genova. They all did more than was called for to help us and deserve all our thanks. We all know that here in Brazil we’re very disorganized (too many chiefs, too few indians), its thru the help of people that believe in us that we’re able to make such wonderful events happen.

Campus Party is a very dear and special event for me. I became a volunteer during last year Campus Party and it made me very happy to see how much we conquered during this long year with the apex being Campus Party 2014 with 35 new Mozillians, 38 new apps, 8 talks, 1 hackathon and 1 workshop. The most important fact is that this event was organized by the community for the community. Even with all the difficulties such as our swag box being lost by the airline company and the overall crazyness that Campus Party is, we managed to engage new members and bring the current members even closer. I think we’re growing a lot.

Where we’ll go from here? We’re Mozilla, we’ll go wherever is best for you.