Sources claim that Microsoft is abandoning EdgeHTML and building a Blink/Chromium based browser. This might be a good business decision for Microsoft but it is a disastrous advancement for the Web. In this short post, I will make a case for why we’re losing the Web and how in a Blink, all we love about our Web will be owned and controlled by a single entity.

Browser engines are an endangered species

We used to have much more diversity in terms of browser engines years ago than we do today. This is easy to understand as the Web in 2018 is far more complex than it was in the early noughties. It is very costly to develop and maintain a Web engine and few companies have the necessary talent and cash to do it. Microsoft is one of those companies but the fact that it might be throwing in the towel on its engine signals a bad development for all of us. 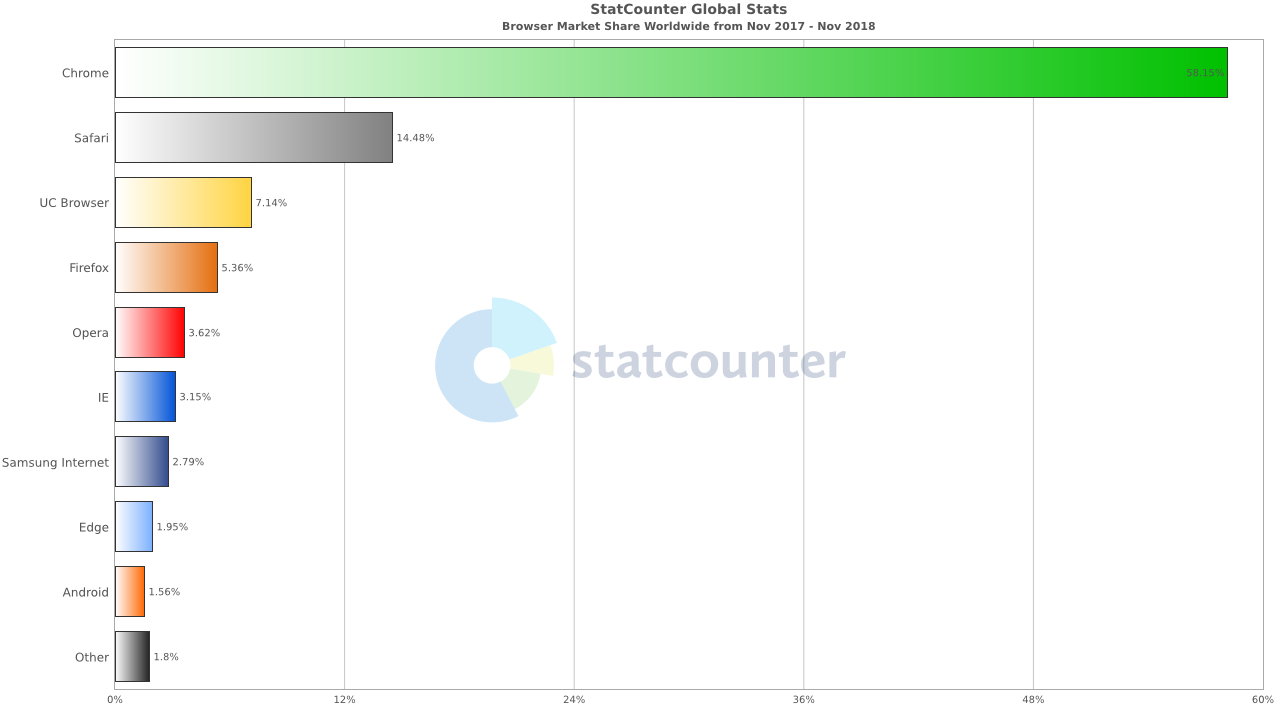 This already paints a bleak picture in terms of diversity, lets look closer: 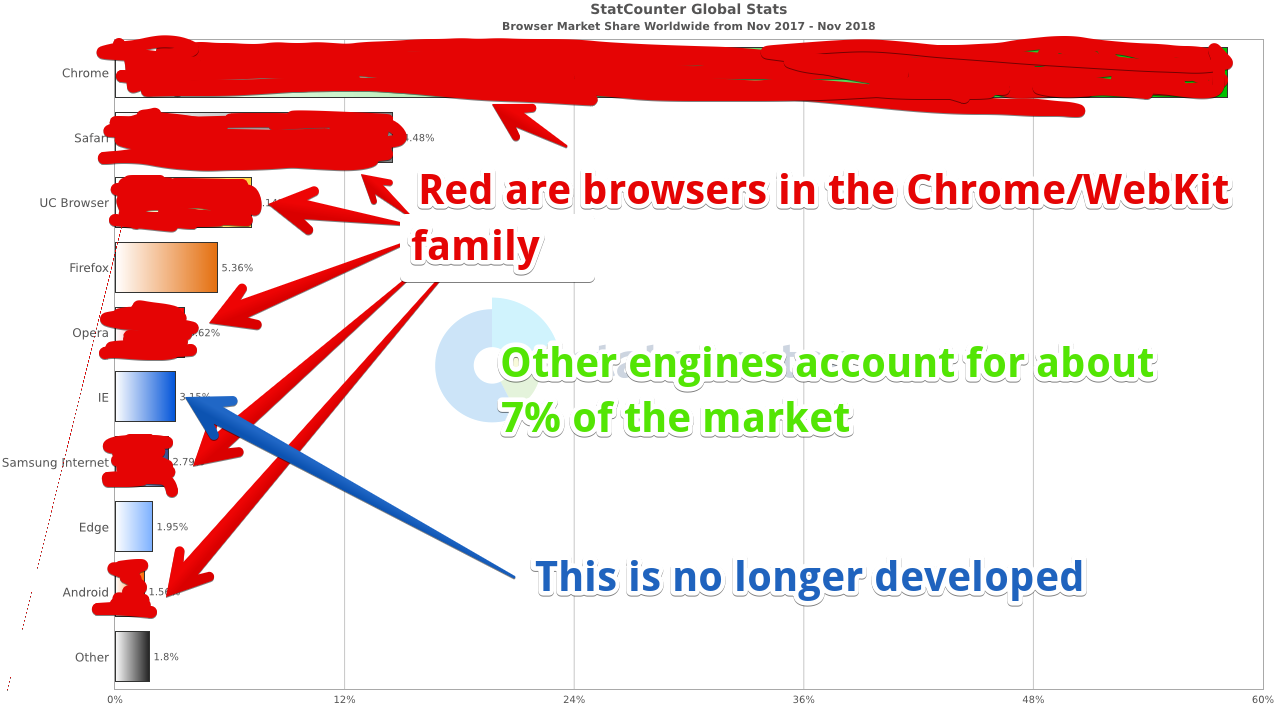 While there is still an others category in the graph above, we can’t be sure about their engines. It is safe to say that between the major five browser vendors, most of them are using an engine in the Blink/WebKit family.

Besides them you only had Microsoft building EdgeHTML and Mozilla building Gecko. Now, if Microsoft adopt Chromium as a base, there will only be Mozilla left building on a different base and this is terrible for the Web.

One of the main claims to fame of the Web is that it is interoperable across engines and systems. You can be using FreeBSD and Firefox and someone else might be on an iOS based device and you both can use the same Web.

This was possible because of the astounding work of multiple stakeholders that range from the W3C to the browser makers to many of the large web properties. Everyone working “kind of together” to make sure the Web works the same and that we have standards. Talking about standards, so far, to ship a new standard you usually need multiple independent implementations of some spec, for example Chrome and Firefox both shipping the same thing. How does that work in a world where engine diversity is non-existent?

Mozilla is making lots of incredible progress with its Firefox Quantum project that is picking parts of Servo and reworking them into Firefox, stuff such as the first parallel layout engine happened there for example. How much progress will stop by choosing a single road forward.

Even though Opera, Beaker and Brave are all doing very good work, it is still Chrome engine behind them and that limits the amount of stuff they can build and innovate. It is like as if they were building cars, there is a lot they can do without actually changing the engine itself, and thats what the Web Browsers are becoming, everyone is working on parts of the car but all the engines are now Chrome and believe me, you don’t want all the engines to be the same, not even if they are all Gecko or if somehow we resurrect Presto, we want diversity of engines and not monoculture.

We already lost the mobile world for a duopoly of Apple and Google, now we’re losing the desktop most used application, the Web Browser, to a monopoly from Google again, how much control do you want that company to have over the future of the Web? All this not counting the many Electron based apps we use in our daily lives such as VS Code, Atom, Slack, etc, which are all Chrome engine again.

Google is controlling too much of the Web stack

Which brings me to the crying “wolf” part of this post, how much control you want to have over your digital life? How much profiling are you comfortable with? We used to have a very diverse Web with many engines and no one in clear control over everything and now we’re seeing a Web that is divided between very few players (check this cleverly written post by Andre Staltz to learn more about it).

Google is controlling too much of the Web stack, it controls the engine used by most users thus making what we used to call User Agents into Google Agents, it also controls the most popular search engine, the most popular email provider, and the most popular mobile platform, all this is profiling you or biasing your experience in some direction that profits them. Companies used to be broken by the governments way before this amount of control happened.

How we’ll fight for privacy, decentralization, safety, once the main engine is an engine made by an advertising company?

Funny, I am writing this in a coffee shop which is exactly in front of Google HQ in London. Their building looking like an imposing presence on me right now, as a giant that covers everything.

How can innovate inside Browsers if all browsers are just Chrome? What happens to Web Standards when lazy web developers decide that supporting chrome is enough, then, the standards become whatever chrome implemented.

Losing engines is like losing languages. People may wish that everyone spoke the same language, they may claim it leads to easier understanding, but what people fail to consider is that this leads to losing all the culture and way of thought that that language produced. If you are a Web developer smiling and happy that Microsoft might be adopting Chrome, and this will make your work easier because it will be one less browser to test, don’t be! You’re trading convenience for diversity. There is no ecosystem in the world that is strong as a monoculture. Monocultures are always destructive, may it be to the soil they are on or to the surrounding villages who now can’t survive without importing stuff. Monocultures are also fragile as whatever hurts it, hurts it everywhere. The one thing monocultures are good is generating money to whoever owns them, and fuck the rest.

A Chromium monoculture puts too much power in the hands of Google. This tilts the playing field too much in their direction. What do you want? A multicultural Web stack, that is interoperable across systems and engines, or a monoculture in control of a large advertising company that profiles everyone?

What can we do? We need to flock to alternative engines, even if for no other reason than strengthening the diversity. If you’re a Chrome user and care about this, then, why not spend some more time in a non-Chrome environment every now and then? Also, why don’t we build more browsers using Gecko or Servo, if it is because it is hard to embed it, then we must let Mozilla know we need a better API and workflow so that we can ship new browsers based on its engine.

Want to send me feedback or keep in touch?

I am a software developer focused on Web, Decentralization and IoT stuff. If you want to check out what I am doing, reach out to me at:

PS: there is a typo in the title but fixing it will generate a new URL and this post has been shared already and I don’t to alter its URL now, sorry for the mistake.