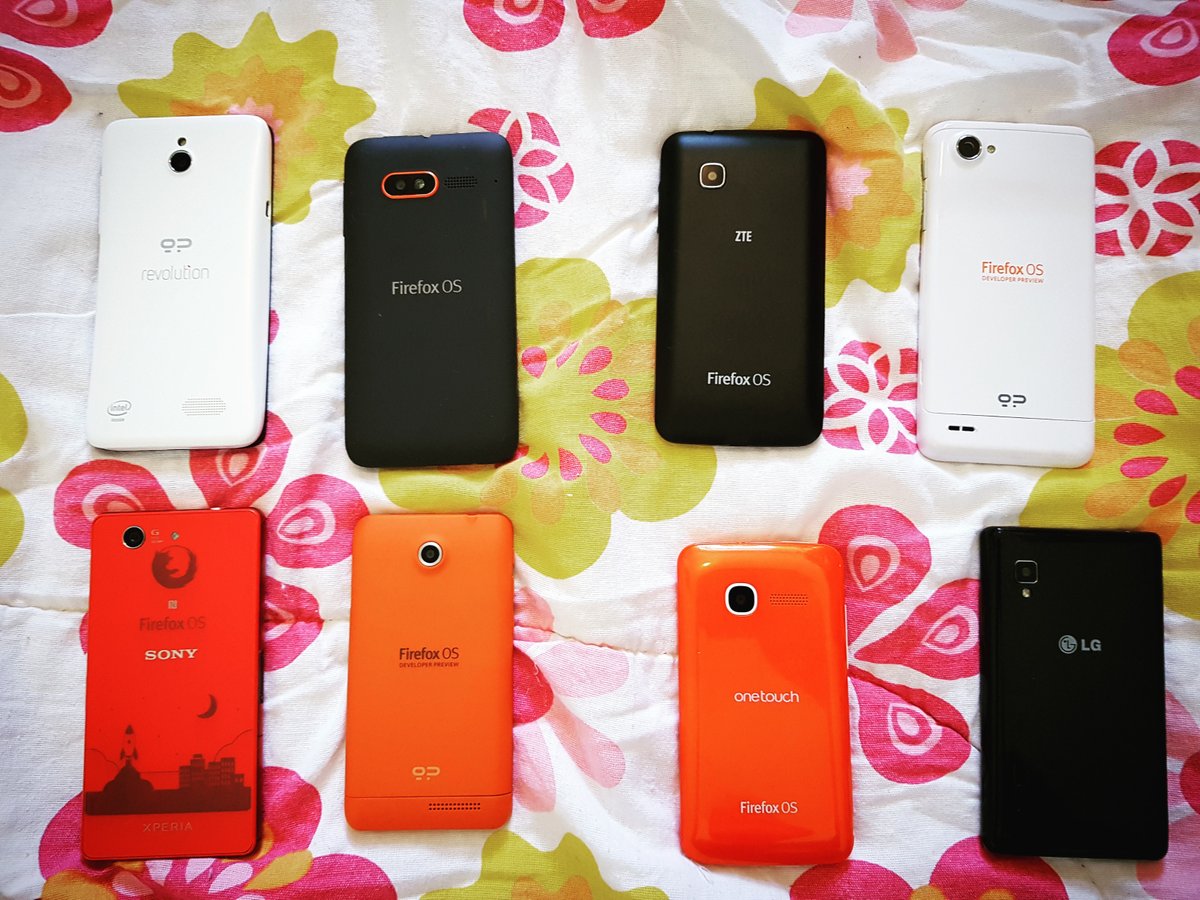 Some of my Firefox OS devices

These are some of my Firefox OS devices, among them we have high-end devices (Sony Z3C), very low-end ones (Alcatel OneTouch Fire and LG FireWeb), some uncommon ones (such as Geeksphone Revolution, the only in the list powered by x86 CPU).

The last time I’ve reached out towards them was a year ago because a friend wanted a spare Android device and I had given all my spare Androids away already. I only have webOS, FirefoxOS and BB10 devices left at home (along with my primary Android). All my FirefoxOS devices are unlocked and in many of them you can install Android ROMs, so I selected a beefier device and gave it to my friend.

While looking at them, I could remember the power and vision we had five years ago: a vision of a more powerful web platform with a more humane, democratic and private ethos. In many aspects, specially the business ones, Mozilla was quite naive but in its final (unreleased) version, Firefox OS was beautiful, useful and had unique features that were never replicated elsewhere.

Even though KaiOS is making a ton of progress and shipped 100M+ devices already, I still miss my little pocket fox, the one that brought the Web and its features into my every day carry bag, the one that never leaked anything without consent.

For a long time, I wanted to take a sabbatical semester and see if I could somehow rebuild a toy distro for desktop/laptop based around the spirit of FirefoxOS. I could never find the time or even the technical expertise to do it. I to miss it a lot.

Last time I posted about this I mentioned:

As I contemplate moving to the UK later this year, I wonder what I will do with the ton of devices I have. Some of which have never been released such as MIPS-based tablet prototypes. I can’t bring them all with me but I will surely bring at least a couple to the old world and hope that some time in the future, we may pursue that road again.

I didn’t carried any with me. I just brought the BB10 Blackberry Passport and my Android device. The reason I didn’t brought a Firefox OS with me to the UK was because my favorite one, the red Sony Z3C that you can see in the photo, had a hardware failure. Its backplate simply popped open. Apparently Sony QA was quite bad in the Z3C series, I’ve seen six of them break over time. Now, soon I’ll be hosting some friends visiting from Brazil, I’m tempted to ask them to bring some of my devices with them. Should I? Which device though…