I’ve just came back from FOSDEM 2020 full of ideas and impressions. I think I’d rather do a quick post now than forget all the stuff.

How it was for me

I really enjoyed #FOSDEM. I’m already planning to come back next year and have some ideas on my mind on potential projects or booths.

The stands were really nice and I wish I had engaged more with them. It was just too busy and crowded for my taste, I should have forced myself in. I couldn’t catch many talks as I was completely lost there, still the recordings will be something that I will watch carefully. For me, events like this are awesome for meeting people in the hallways and having a chat. Some of my best memories of the event are from meeting and interacting with people, some of which I have known only online up to now.

So for me it was basically about talking to people and interacting.

I took a train on Saturday to be there and left on Sunday, but it felt like I’ve spent five days there. I think that is how it should be.

I gave a 25min talk there entitled Loanwords, Agriculture & WebAssembly, it was an expanded version of this lightning talk. I don’t know if I planned the expanded part well, I need to work it some more. This talk has the sweet spot as a 15 minutes piece. I don’t know if it works as a 25 minutes talk.

It is hard for me to gauge how the talk was received. Some of my friends told me they liked it but I did saw some blank faces in the audience, I’m wondering if they didn’t connect with the subject, or, if it was a communication failure on my part and I couldn’t convey what I wanted to convey. 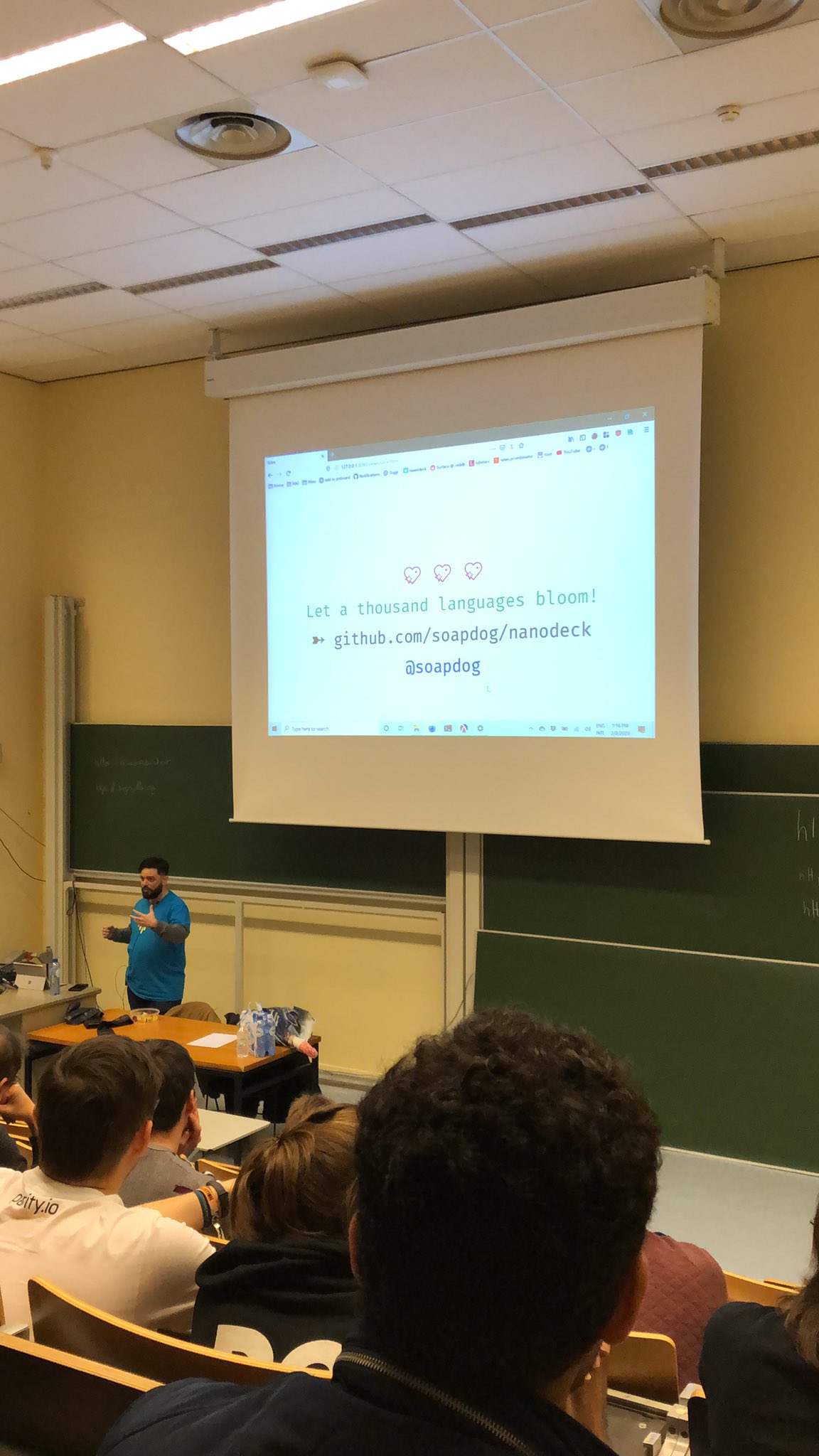 In that talk, I use Racket to build a language I called nanodeck. This language is a DSL for building slideshows and when executed generates a web-ready slideshow page using a combination of JS and WebAssembly. Be aware that the source code is horribly. I build that by pulling an all night while despairing over the fact that the talk had WebAssembly in the name but the language was originally generating just JS (I felt like a hypocrite). This nanodeck is not a product, it is a demo to make a point during the talk, the point that anyone can create a programming language (including me).

Working with Racket is a pleasure but I know so little and I tend to forget a lot because I haven’t been using it frequently. For 2020, I hope to dive deeper into the community and ecosystem around it. Maybe I’ll go back to Scheme as well, as I think Guix and GuixSD are a great idea.

What are other similar conferences in Europe that I should be aware of? Not similar in size as I know this is kinda hard, but similar in form or spirit? Anything in the UK?