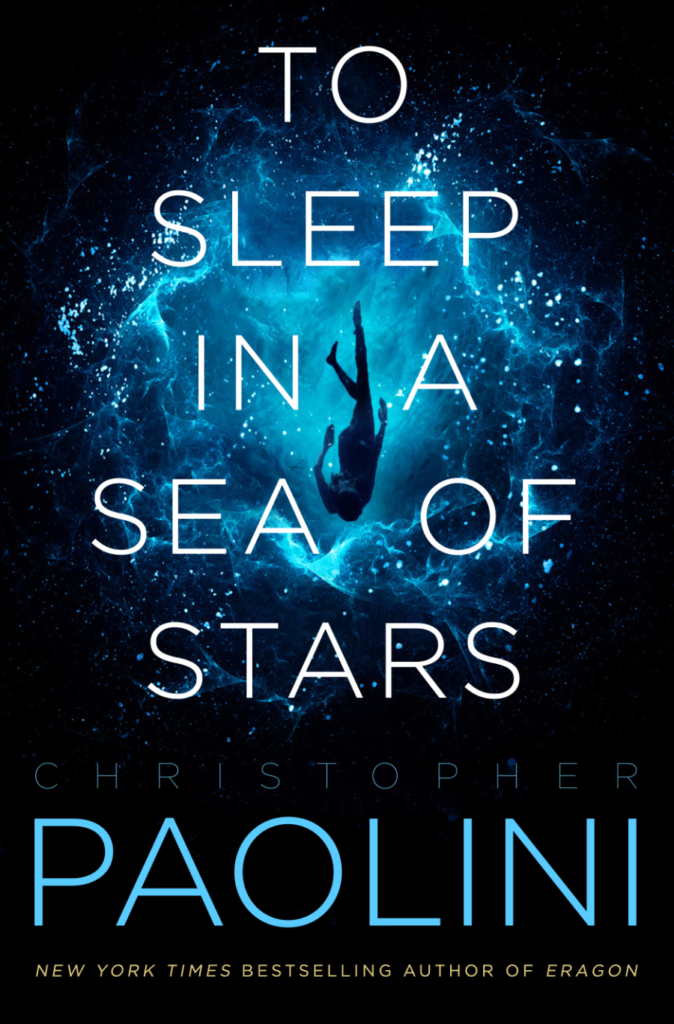 To Sleep In A Sea Of Stars_ is a space opera by Christopher Paolini, the same author behind the hugely popular inheritance cycle (aka the Eragon books). This books is — as far as I am aware — his first science fiction book. Even if he is seasoned author, many would consider writing in a new genre to be challenging, personally I think he did great. In this review, I’ll go over what I liked and wanted to see more, what didn’t worked for me, and my general impression. Be aware that there will be spoilers in the review.

“To Sleep in a Sea of Stars is a story of enormous intergalactic weight and consequence, but also of deeply personal human strength, compassion, and awe.

During a routine survey mission on an uncolonized planet, xenobiologist Kira Navárez finds an alien relic that thrusts her into the wonders and nightmares of first contact. Epic space battles for the fate of humanity take her to the farthest reaches of the galaxy and, in the process, transform not only her—but the entire course of history.” — source

As you can see if we decided to use a single word to describe the scope of this book, it should be epic. Space operas tend to shift towards the more epic end of the spectrum with stories spanning vast spaces and involving the destiny of huge populations, this book definitely does that, but it does it while keeping the focus of its narrative personal and small.

This happens due to the very deliberate decision by the author to use limited third-person point-of-view. We follow the protagonist — Kira — and experience only what the character experience. This naturally leads to longer books as the lack of an omniscient narrator prevents the author from being able to use exposition to explain what is going on. We learn stuff, as Kira learns stuff, and it takes a long time for Kira to learn stuff, this is not a small book. 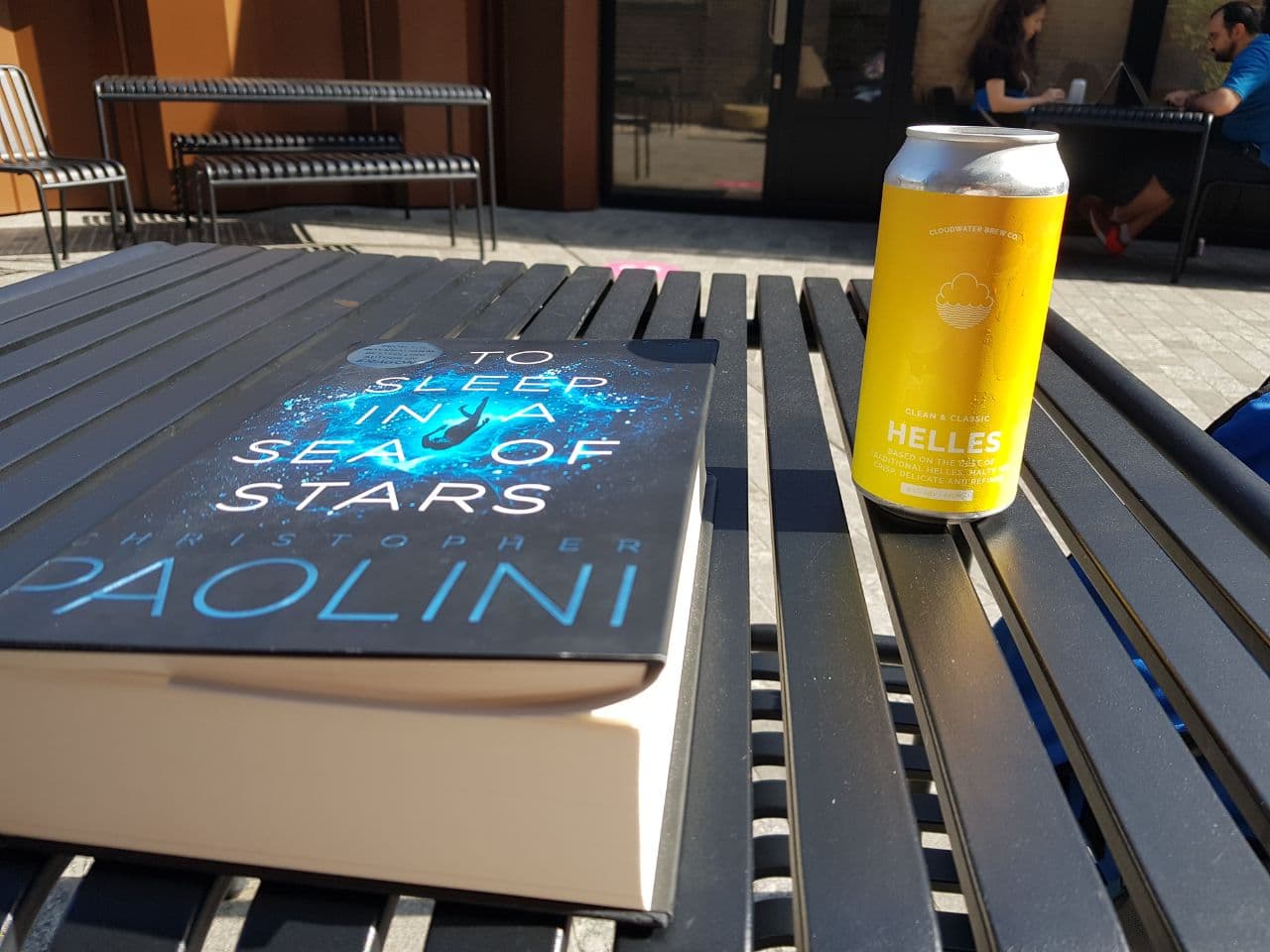 I think that is the most important decision you need to make when you’re approaching this book, Are you invested in this story enough to plow through a long limited third-person narrative? Christopher Paolini pacing is not slow but given the way the narrative is structured and and the large quantity of pages, the book feels slower than it is. Events and their consequences — and the understanding of said consequences — take a long time to manifest. This makes me wonder if some people will DNF the book because of these choices.

What worked for me

This book was 10 years in the making and it shows. Paolini writing is spot on. It is consistent throughout the book and shows a very good command of the written word. The prose is accessible without being simplistic, and even though I’ve read prose that caused better impressions and even made me cry, the writing on this book is the correct form for the content.

Humans have expanded through the stars and colonized many systems. The way the human science is planned and described in this book makes me smile. An incredible amount of research went into making FTL, cryogenics, and other future tech believable. The inclusion of appendix describing the technology in more depth is nice addition for fans of hard sci-fi.

All the human characters have enough depth. They feel distinct and speak with their own voices. This may sound like praising what should be the minimum effort by every author out there, but in reality is that character development is not a staple of science fiction. Asimov characters tend to be so cardboard that switching the gender of a character doesn’t change the story.

Clearly, this is the first book in a series. By the end of the third act, there is a clear setup for more books and I think it has been done well. It reminded me of how Babylon 5 setup Crusade as a spin-off. I don’t know if the next books will follow Kira as the Goddess she became, or it will leave her destiny unknown and will follow the Wallfish crew as they try to figure out what happened to Kira.

What didn’t work for me

Space operas come in many shapes, this one is more militaristic than what I’ve been in the mood to read. I came to this book expecting some ancient relic atmosphere, with a xenobiologist trying to make sense of some alien stuff, with a dash of thriller in it. I was not expecting it to go startship troppers and focus a ton of content into combats and military. I’m in here for the aliens, not the pew pew pew.

This militaristic focus broke the verisimilitude of the book for me. Kira is a xenobiologist working for a corporation but throughout the book she becomes alien rambo having intimate knowledge of space combat, technology, fighting and war. A normal scientist wouldn’t know that shit and shouldn’t act like that. It would be better if there was some setup with Kira being ex-military, then all that would make sense.

One thing that annoyed the hell out of me is that the characters have a nickname for the alien species that is one of the main antagonists throughout most of the book, they resemble sea creatures and the humans call them “jellies”. Okay, I get this necessity of painting the other, specially the enemy, with a pejorative nickname. I understand. My problem is that after they make peace with the jellies and are negotiating for the future in the unity station, the humans still calls them, to their faces, as Jellies. This is after learning that they call themselves the Wranaui. Heck, if the French were aliens, and we called them the baguettes, then later became friends with them, we would start calling them French, and not keep using the bad nickname. Why does every single human keep using the word Jellies in the end? I don’t like this at all.

Paolini has more experience writing fantasy books and this shows because this book has fantasy elements in it. It feels like a reverse Clarke’s law in which they’re disguising something that behaves like a magical artifact as highly advanced technology. Don’t get me wrong, I love science fantasy, give me pulpy Princess of Mars, heck my favourite book of 2020 is Gideon The Ninth which is clearly science fantasy.

To Sleep in a Sea of Stars has fantasy elements in it but never acknowledges them. That scene close to the end of the book where Kira is bestowing gifts to the crew of the Wallfish is straight out of some Dungeons & Dragons adventure where some God is giving out enchanted artifacts to the band of adventures, really that felt totally out of place for me. It feels like that crew is being equipped to be the protagonists of a magical quest in the next books. It reads like a fantasy chosen-one / band of heroes quest preparation.

This brings us to tropes and the most important section of this review.

I’m not the right reader for this book

Every author has an audience in mind when they write. It is impossible to right universal books in my opinion. It might have happened to you, dear reader, that you finish a book and recognize how good it is and want to turn to the author and tell “Well done!” while still personally not enjoying the book very much. My taste and whatever brain faculty allows me to appreciate good work are not necessarily connected. There is a ton of bad work that I simply love, and sometimes there is good work that is not my taste.

This book is good. Very good.

But I didn’t enjoyed it.

When I stopped to think why, I came to the realization that it boils down to tropes. I’m 40 years old and I’ve been reading science fiction since I was in my early teens. My parents had hundreds of science fiction books at home, and I have read them all. And then, I bought more. I’ve read from the golden age to what has came out in 2020. I love this stuff. I’ve read too much and I can recognize tropes from miles away. Every single idea in that book, I have seen it somewhere else. There is no original story in any book, all books are derivative, and some of my favourite books are derivative. The problem is not that this is recognizable, it is that it was recognizable to me and it didn’t added something new. I wanted to be surprised, to see some twist, but no, every single trope I called in my mind was realized just like I thought it would. I got the references, the homages, the intentions behind it. I’ve felt like a scientist dissecting a novel when I should actually have focused in being a reader enjoying the novel.

I read too much, and I’ve studied too much about tropes and narratives. My knowledge of this stuff made this book less enjoyable for me, because it made it predictable. There is a place for predictable stories. Heck, Agatha Christie stories are a marvelous treasure trove and they are all predictable. Lots of TV series are predictable, and we still watch them. Predictability gives us comfort, allows us to be on a safe place and just enjoy the ride. I didn’t prepare myself for this kind of predictability in this book, and that is my fault. I saw a gigantic book about ancient aliens, and I prepared myself to see something new, and I was disappointed by just seeing a very competent writer doing a very good job. As you can see, the problem is mostly my expectations. I set them wrong. There is nothing really wrong with the book, all my criticism are about my own personal taste and expectations not really matching what I encountered in the pages.

Conclusion, or who is this for

I think this is a very good book for people who are new to science fiction. If you’re a Paolini fan and been reading mostly fantasy, you’ll be delighted by this book. If you’re into militaristic stories full of combat, weapon, and gun-ho attitude, you’ll find something for you in this book. If you’re seeing yourself with a lot of free time and want to immerse into a fully realized secondary world — to escape our reality for a bit — this is a good book for you.

This book is adventure, danger, and awe. It has a good setup for more books, so your investment of time and will reading it will pay off as more books dig deeper into the fractalverse.