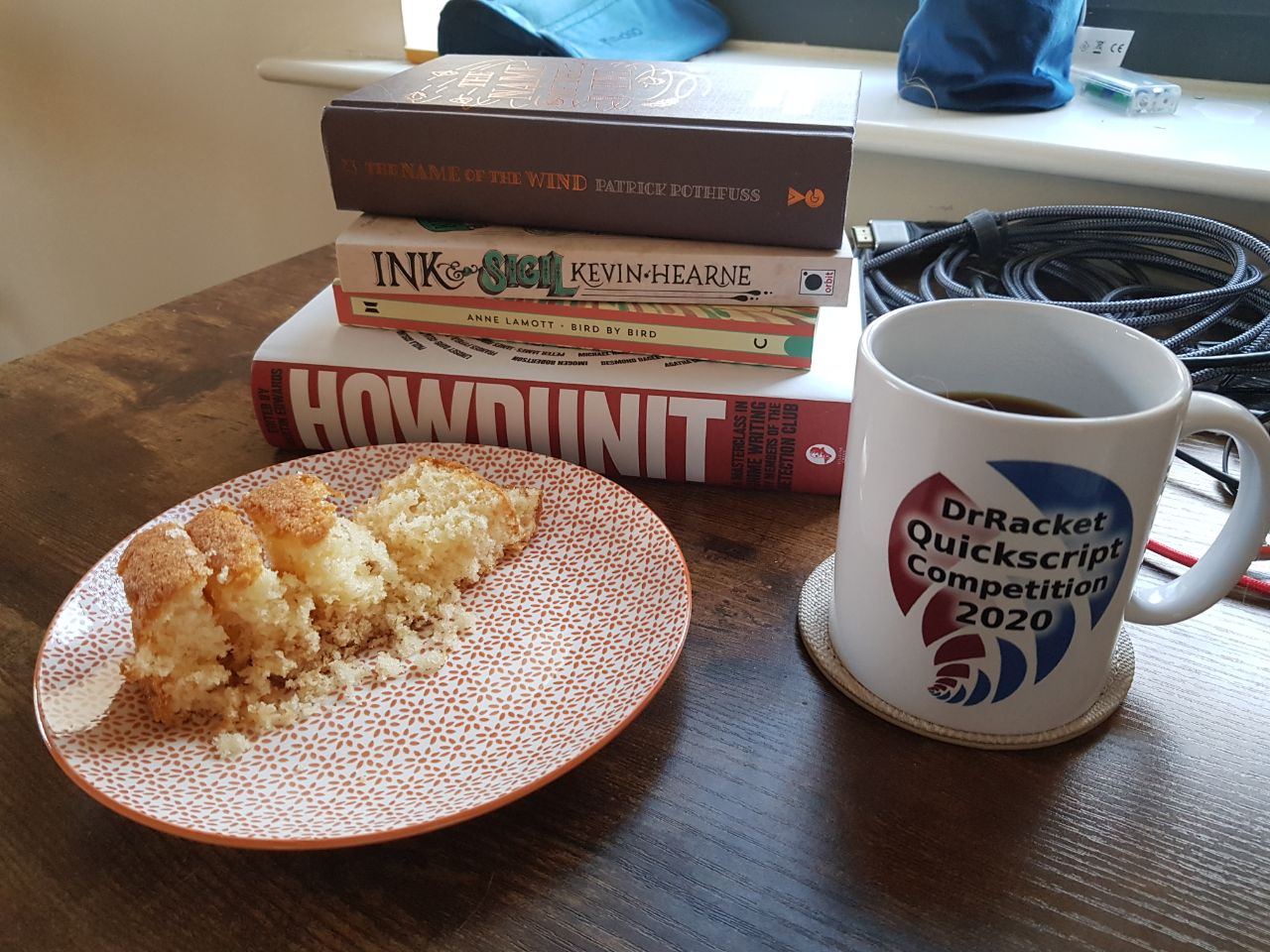 A good way to start the day: coffee, cake, and books.

Yesterday, I walked 12km all the way to Foyles and back to buy some book. There are some more direct routes but I enjoy losing myself in the streets of #london and discovering cool new places. For example, I found a little coffee cart that sells espressos using lever machines. They were closing by the time I walked by, but now that I know they’re there, I can go another day and try it out.

In that book haul, I finally got my hands into The Name Of The Wind, by Patrick Rothfuss which many reviewers I follow claim is an absolute gem, not only because the usual reasons but because the author’s prose is a masterpiece. I’m really looking forward to reading it. If you’ve never heard of it, well, just check these quotes about it from other authors I really admire:

“Rothfuss has real talent, and his tale of Kvothe is deep and intricate and wondrous.” — Terry Brooks, New York Times-bestselling author of Shannara

It is a rare and great pleasure to find a fantasist writing…with true music in the words. — Ursula K. Le Guin, award-winning author of Earthsea

The characters are real and the magic is true.” — Robin Hobb, New York Times-bestselling author of Assassin’s Apprentice

Masterful…. There is a beauty to Pat’s writing that defies description. — Brandon Sanderson, New York Times-bestselling author of Mistborn

Continuing with the fiction books in the haul, I also got Ink & Sigil, by Kevin Hearne. I’ve been intrigued by this book since the very first moment I read about it in a tweet. It is an urban fantasy set in Scotland and it contains curses, craft cocktails, and fae. I’m a sucker for Fae. Apparently, this book is set in the same universe as his other books, which I haven’t read, but they’re not pre-requisites for enjoying this one.

The other books are about creative writing and part of my study of the field so that I can better prepare myself for a career transition into fiction writing. Bird by Bird, by Anne Lamott is a memoir about writing. Many people says it contains really good insight and advise. I decided to buy it after reading this quote from it:

“Thirty years ago my older brother, who was ten years old at the time, was trying to get a report on birds written that he’d had three months to write. It was due the next day. We were out at our family cabin in Bolinas, and he was at the kitchen table close to tears, surrounded by binder paper and pencils and unopened books on birds, immobilized by the hugeness of the task ahead. Then my father sat down beside him, put his arm around my brother’s shoulder, and said. ‘Bird by bird, buddy. Just take it bird by bird.’”

The last book in the haul, and the largest one in the haul is Howdunit, by members of The Detection Club. Even though I’m more of a Science Fiction and Fantasy reader, I’ve always enjoyed whodunits and detective stories. In the series I’m planning, I’m going to merge these two genres by having a detective in a fantasy setting. I know this is not original and has been done before but, most stories have been done before and we still read them anyway. This book is a collection of articles by various members of The Detection Club, the oldest crime writing network, and I’ve heard mixed things about it. I bought it because I suspect that there are hidden gems in it. Oh, that club has existed since 1930, they have a silly oath:

Do you promise that your detectives shall well and truly detect the crimes presented to them using those wits which it may please you to bestow upon them and not placing reliance on nor making use of Divine Revelation, Feminine Intuition, Mumbo Jumbo, Jiggery-Pokery, Coincidence, or Act of God?

This is a part of their fairness rule which meant that both the detective and the reader should have a fair chance of guessing who the villain is based on the clues before the eventual revelation. I kinda like this because I’ve read my fair share of books in which the solution is completely out of the blue, or as we say in Portuguese: a porra do autor tirou essa merda do cu. I like the idea that the reader is in the same quest as the character and that the revelation makes sense and can be infered by people who are paying enough attention.